Do you remember the Dragon I wrote about in my post about Skyrim? Well, it turns out, he’s here to stay. I powered my 360 on the next day. Right in front of me – I saw the Dragon yet again. Fast travelling around Skyrim and finishing quests he just kept appearing. But now he didn’t spawn right next to me. He spawned in the most obscure (yet close proximate) locations. One think I noticed was that she (or dare I say she?) didn’t spawn in the middle of towns. Until last night. I powered my 360 on and the Dragon was nowhere to be seen! I felt a bit sad, to be honest, but I thought the glitch was done glitching. Nope. When I travelled to Riften and went  down to go into the Thieves guild I saw him – again.

And then I saw him (well, his head) yet again… In a house (or something) I walked into…

Seriously mister Dragon? I wonder what he’ll be up to later today when I boot up my 360 again… This reminds me of the story of the haunted The Legend of Zelda: Majora’s Mask cartridge. Despite the haunting Dragon’s usual appearance I had a great time playing Skyrim yesterday – mainly because of this! 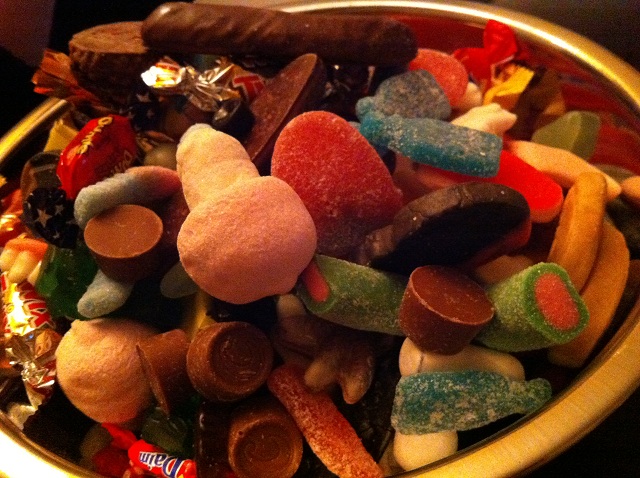 1½ Kilo of Swedish Sweets! I ate almost all of it (not quite). Will probably finish it today 😉 Then I had some peanut rings as well!

After playing Skyrim I wateched Soylent Green with a friend. Not sure what I’ll watch tonight (when I finish the candy). We’ll see… Whatever you guys do today – I hope you think of me sitting in my home cinema, watching movies and playing games, eating a tonne of happiness from a bowl.

6 thoughts on “The Haunting Dragon”