I wanted to do this post a while ago but never had time. So here we go!

As a science fiction author one must have a vivid imagination (of course) and be able to foresee social and technological advancements. Not too long ago the Canadian game developed BioWare held a voting competition on Facebook.  In their upcoming Sci-Fi game Mass Effect 3 the player can customize the appearance of the protagonist, Commander Shepard, to fit their liking. Thus they asked their fans to vote for the version of the female Shepard they wanted to have on the cover. These were the ones they could vote for: 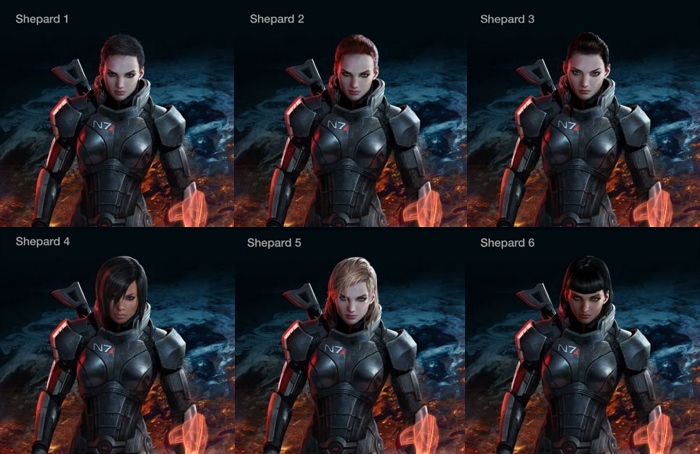 Number 5 won. I voted for her since I thought she was the prettiest (or hottest, if you will) and would fit the cover nicely. Many fans, however, were enraged, saying that No. 5 looked like a super-model and not a soldier. That is something I can agree with. The buzz-cut No. 1-3 women seem more like soldier but I find them lacking any type of sex appeal. Now why would a soldier need sex appeal, you might ask? For many reasons. I believe that even in the future looks will matter. Today – those who are born with good genes and are considered beautiful have an easier time getting around. That is a fact. Yes, humans are shallow, but we are born like that. It’s the same mechanism that makes you pick the nice fruit in store instead of the ones which are seemingly damaged and “bad.” Choosing our partner works the same way. Looks matter. It’s as simple as that.

Linking this to Shepard – I believe that a woman who is more attractive have a better way of getting around and having her will asserted. Mass Effect is not only about gunplay and combat. It’s about making contacts, talking to people, talking to the right people and saying the right things. In my opinion No. 5 would have an easier time doing that because of her good looks (who doesn’t like a blonde?). She could either be a deceiving femme fatale or a black widow seducing her opponent and tricking other men into giving her what she wants. Such qualities are essential, not only now, but in the future as well and for a soldier who tries to save the galaxy they sure might come in handy.

Besides, the male commander Shepard isn’t so bad himself. He is modelled after the Dutch model Mark Vanderloo, so why shouldn’t the female version be gorgeous?

In-game version to the left and Mark Vanderloo to the right.

After a while I stopped seeing these comments about the “female Shepard’s sex appeal being out of place.” Finally, I thought, people understand being good looking is a good thing! Then BioWare decided we had to vote on the female Shepard’s hair colour. Nothing special really. I voted for the blonde version in the picture above but the red haired version won. She looks good as well so I don’t mind. Then they released this picture of her:

Wow, she’s hot I thought when I saw this picture. Being the gamer I am I read the comments about this pictures when it was released by BioWare. It was mainly positive responses, saying she looks good as a red head, and they’re looking forward to the game etc. One guy complained that she was eerily similar to his ex-girlfriend. Lucky bastard. Anyway! Then I started seeing comments about people complaining that she looks like a 12-year old. That’s a bit harsh, isn’t it? After reading that comment, the more I looked, the younger the woman in the picture above seemed to become. I can honestly say it doesn’t look like she’s saved the galaxy twice and has a long military service record. She seems too young for that. Still – does it seem unrealistic that she look young? I could repeat my argument about the fact that good looking people not only have an easier time getting around, but also draws attention to themselves. A game has to sell and thus its main protagonist needs to draw attention. I doubt a middle aged woman with a shaved head would have made horny teenagers pick up the game. Young is better because Young looks better.

But there is another side to the whole debate – which is the main thing I want to discuss. The woman above, though she looks 17-22, could very well be above 30. In the future – of course. Even today we strive to look as young as possible. Humans always have. Otherwise we wouldn’t tell stories about fountains of youth. In the future, in a world with greatly advanced genetic technology, I believe women would want to appear as if they were 16 – 20. When it becomes scientifically possible many will, without doubt, look like teenagers their whole life. It happens today with surgery and it will happen tomorrow with genetic modifications. Why else would “Just-18 xxx” movies be such a huge industry? And why would modelling agencies recruit someone at the age of 16 only to throw her out when she turns 25? Humans, both male and female, want youth in all its forms. For some 16 or 17 is not enough. In the same fictional world where one can stay a teenager forever some will go to the extreme and became 10-12 in their appearance. In fin de siècle England, which is only about 100 – 150 years back, the most expensive prostitute you could find was a 12 year old virgin from the upper class. Adults sleeping with boys and girls under 14 was common. By sleeping, and surrounding yourself, with youth it was believed you somehow “leeched” of our their innocence and young age and thus you lived longer. Later we decided this was immoral (probably for the better) and placed age restrictions on sexual encounters. In Sweden it is 15 but very few reach that age still a virgin. In the future no one will be able to tell how old anyone is and such restrictions will no longer apply. Sooner or later we will tame our own age, become masters of our own destiny, and choose what we will look like. Therefore I believe a military commander, with a distinguished military service, who has saved the galaxy twice, and been brought back to life once, can appear as young as 17.