To start off I will discuss the Humanity+ magazine I mentioned earlier. The essays “The Next Five Minutes,” by Martin Thomasson, “Puppets on a String,” by Klas Ekman, and particularly “Next Stop: Humanity+,” by Jonatan Leman I found extremely interesting. Though all of them brief and minimalistic, lacking proper referencing, they are worth a read. For now, however, I will focus on the first two mentioned.

Thomasson’s essay lay out the roots of Cyberpunk and how the world slowly turns into the dark dystopian future portrayed in movies such as Ridley’s “Blade Runner” from 1982 (based on Philip K. Dick’s novel Do Androids Dream of Electric Sheep?). You must all recognize the scene, the darkened sky, the streets cluttered with bleak-faced men and jumbo sized advertisement screens drowning the sound of human life.

“NOW, OF COURSE, reality has gotten ahead of cyberpunk’s original vision.” Thomasson writes. This is, he claims, because private military contractors are already the ones waging war, neural interfaces are already in common use, and experimental drugs are tested without control. These claims, though I know them to be true to some extent, I would have loved to get referencing on. Yet when he says that reality has already gotten ahead of the cyberpunk vision I cannot help but disagree. While there is no single view of what society is like in a futuristic cyberpunk world I think we can all agree on it being a world governed by oppression whether it be by the state of a powerful corporation. In the real world we have yet to come to such a state where a reversal from totalitarian control of the population by the government and corporations is impossible. The individual can still make a difference. Now, I would like to have a footnote here, or a reference, showing an example of a single person making a difference. It would be easy to go to Google, or any news outlet, and find an article about such an events. The outlets reporting media, however, as the player will learn from playing Deus Ex: Human Revolution, are biased, corrupt, and twist the truth. This is something especially true for Sweden who frequently alter facts when presented to the public. 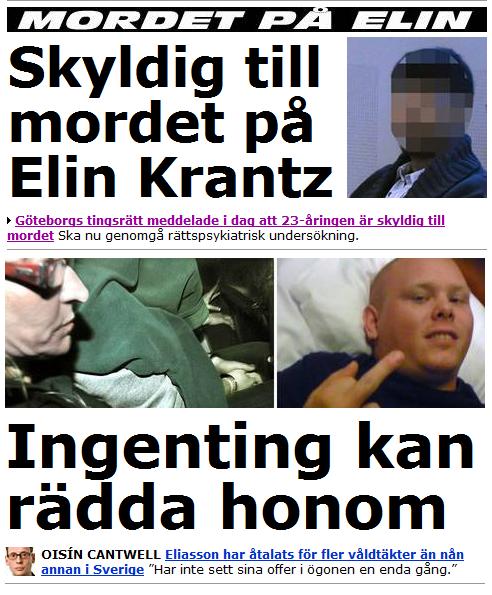 The major news shows and newspaper also suffer from selective censorship. An example you say? Well of course I will give you an example. I have many – too many in fact. This picture to the left, however, is the best example I can provide you with. These two headlines were presented on the newspapers front homepage on the same day (18-06-2011). For those of you who can’t understand Swedish and/or are unfamiliar with these two cases I’ll provide a summary.

The above article is about a man who killed and raped a woman. The headline states “Guilty of the murder on Elin Krantz” with the sub-heading “The Gothenburg court announced today that the 23-year old is guilty of murder.” Notice that his face is blurred. It is common practice, both in Swedish and other foreign media, to blur faced of those who have been charged with a crime but not yet found guilty. However, when they have been found guilty the blur is removed because then they are officially criminals. This is not done here. Strange.

The article below is about a serial rapist that the Swedish police caught after a long search. The headline is “Nothing can save him” with the sub-heading “Eliasson has been charged with more rapes than any one else in Sweden.” Notice that his face is not blurred even though he, at the time of this article’s publication, had not been found guilty but simply charged with his crimes. While it is fair to say that the media and the police were very sure this was the man and they had enough evidence to convict him the evidence was yet to have been proven in court.

How come the face of the above criminal is blurred, after he has been convicted and found guilty, while the man below, who simply has been charged with crimes, is not censored?

I will return to this question after discussing Ekman’s essay briefly. What his essay boils down to is that the government and powerful corporations are in control of everything and truth lies behind conspiracies. “There’s at least one hidden motive behind everything that happens and at least one bunch of men clad in long robes.” He writes.

While Ekman also admits the line between paranoia, and quest for conspiracies and the truth in the world,  is very thin, he has a point.

Not too long ago I rebuked all theories of conspiracy and simply thought they were created by some lonely humans with a vivid imagination and too much spare time on their hands. Then after the many 9/11 conspiracy theories and so on I thought that it must be an American thing that the people cannot trust their government. Not entirely unjustified after events such as the Watergate scandal.

Then I heard similar things about Sweden and Swedish media. Of course Swedish media does not change and alter media. We are not fed lies like the other large landmass on the other side of the Atlantic. Or are we?

Turns out – we are. Sweden, as it is well known, has an immigration problem which the government refuses to deal with properly. Every action taken to integrate aliens into our society fails and ends up costing money. This, of course, is the reason the SD party (Swedish equivalent of the BNP) got into Parliament during the last election. While I do not believe SD politics have a proper solution to our problems, I do believe something has to be done. The government turns away from this issue and pretends nothing happens, ignoring the fact that there are growing instances of reverse racism and increased crime in areas surrounding those containing a high quantity of immigrants, and the Swedish media act just the same. Since we have a problem it would be even worse if the public actually found out the extent to which integration of immigrants has failed. That would only increase the divide between Swedes and non-Swedes, increase racism from both of these groups, and increase friction in society. Thus we get strange instances like the two articles above. The murdering immigrant, even though found guilty, is censored while the Swedish serial rapist, only charged with his crimes, has his face published unaltered.

What I am trying to say has nothing to do about Sweden’s immigration politics. It is about the Swedish media and the truth behind lies. I hate media censorship and alterations of the truth because people buy it. They read it without question and are affected by the subliminal propaganda such as Aftonbladet’s in the picture above.

It is safe to say that Deus Ex: Human Revolution and the essays in Humanity+ carry messages that are important. Messages people should listen to. The masses have been, and are, blinded by corporate and government lies. When you cannot trust anyone, or anything told to you, there is reason to believe Thomasson when he says reality has outrun cyberpunk’s original vision. As I said before, however, it is not too late. Educate yourself as to what is truth and what is fiction and learn to see behind the lies. Go into politics and know what your values are. Learn to know yourself. Once you know about the world I can guarantee you will find no party or politician who you will ever agree with again.

This reminds me of a part of the game. I won’t go into details because of eventual spoilers, but in this particular part you are given a secondary object, nothing you think about too much while playing. You can complete the objective or simply ignore it – it’s up to you. I chose to complete it (being the completionist that I am). The thought crossed my mind that there was something strange about the whole thing but I went along with it – against my better judgement. Hours later I realised my mistake at acting along with the rest of the masses and I had to pay for it. The very game teaching me to see through corporate lies and uncover truth pinned all it tried to teach against me. And I failed. For ten minutes I sat in anger at my own stupidity. I should have seen it coming, I should have been more observant and criticised and reflected on the change that was going on around me. No game has ever made me feel that way. Apparently I have a lot to learn.

You might say I take everything to seriously. It is just a game after all. Well I say it is time to see games for the cultural art form that they are. Some of them, especially Human Revolution, have legitimate messages they try to convey. Especially when put in context of the essays contained in the Humanity+ magazine. 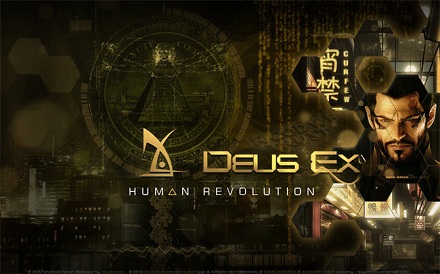 One thought on “Roots of Deus Ex: Human Revolution and Censorship in Swedish media”